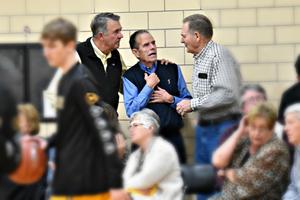 At the Seminole ISD Board of Trustees meeting on Monday night, Joe Stewart, asked the board’s consideration on the naming of the Seminole High School’s basketball court after Leland ‘Buck’ Caffey.

Buck Caffey, a long-time Seminole native played on the 1955 Boys State Basketball Team and then later coached the Indians. Coach Caffey had a successful tenure during his time at Seminole as the Head Boys Basketball coach; including a 1967 Regional Finalist, 1979 State Championship, 1980 Area Finalist, and 1984 District Championship teams.

Superintendent of Schools, Kyle Lynch stated, “We have had multiple requests concerning honoring Buck Caffey. It’s interesting, I did some of my very first interviews with our two Athletic Directors and I asked them, ‘tell me someone who has influenced you’. In two separate meetings, both said Buck Caffey. So I asked, ‘Well, when did you play for him?’ and they responded, ‘I didn’t.’ His cast of influence is more than his players - and I find that impressive.”

Congratulations and our sincerest appreciation to Coach Leland ‘Buck’ Caffey for his deep-rooted leadership and mentorship to our tribe.